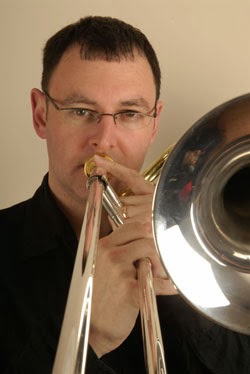 Due to increasing commitments Brett Baker has stepped down from his regular
commitments at Principal Trombone at Black Dyke Band, this will be effective
after the European Championships. Brett will continue to be associated with
the band, and will further develop projects such as the junior and youth
quartets within the Black Dyke family, where he has been a prominent playing
member for the past 14 years.

Brett commented 'I have found it difficult to balance commitments at the
University of Salford, as well as several outreach projects, plus global
trombone related activities, private teaching and commitments at Black Dyke.
I have very much enjoyed conducting the University of Salford Brass Band and
other opportunities to conduct, such as with Leyland Band last year. This
year I want to focus more on conducting whilst continuing to play when the
opportunity arises. I have been conducting bands since 1999 when I visited
Australia and worked with the Kew Band, since 2010 I have studied conducting
at Salford University with guidance from Howard Evans, Howard Snell and
Nicholas Childs, I knew then it was something I wanted to focus on when the
timing was right'.

Brett will be featuring at Regent Hall with Croydon Band on the 8th of
March, the Eastern Trombone Workshop in Washington DC in Mid-March, as well
as featuring at the Future All Star Event for the New York Staff Band in
Monclair, New Jersey in late March, he then returns  to take part in
preparations for the Europeans at Black Dyke.

Brett continued 'I plan to take on as much conducting experience as possible
over the next few months with the aim of finding a permanent post later in
the year, this means being available on rehearsal nights with bands and
hence my decision sadly to step down from regular playing with Black Dyke
after 14 enjoyable years, I¹m looking forward to a new chapter, but I
certainly will not turn my back on the trombone playing and my busy schedule
as a teacher'
Dr. Nicholas Childs stated

'Brett is an outstanding soloist and has given a wonderful service to myself
and Black Dyke.  We all wish him well and hope we can still be part of his
future.'
Posted by Brass Band World at 16:30