An Interview with the New Chair of Brass Bands England, Mike Kilroy in Our October Edition 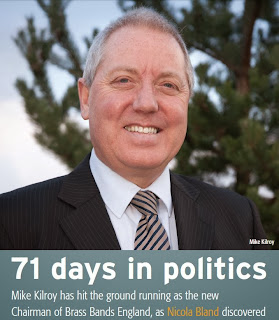 (Taken from our October edition)

Mike Kilroy has only been in the seat of power for English brass banding for 71 days and has already had an impact on the organisation that could be likened to throwing a big boulder into a small puddle.
Incredibly though, his ‘hit-the-ground-running’ leadership style has barely created a ripple in terms of dissension within the rank and file of the organisation, or in the English banding world at large.

Why? Because Mike Kilroy knows the value of consensus governance, but (and here’s the important bit) with accountability - perhaps Margaret Thatcher should have taken lessons from him! Such diplomacy and collaboration has enabled Mike Kilroy to distinguish his first ten weeks of office with many more worthwhile achievements than have arguably been garnered in the first three decades of the
life of the BBE and its forerunner - the BFBB, not withstanding the altruistic intentions and achievements of the previous incumbents of the office that he now holds. He has already held meaningful meetings with the Arts Council of England about replacing the BFBB / BBE’s controversial and unattainable ‘Band in Every Postcode’ performance indicator in favour of a more achievable outcome and is deep in conversation with the Arts Council to reach agreement on a new business plan, for which evidence / outcomes can be more realistically proved. He is also seeking a substantial increase in Arts Council funding from 2015 and has a meeting in London with the grant-giving body, the week after the National Finals, to gauge its mood about just how much more money might be secured for the development of English banding. With that in mind and in preparation for it, he has refreshed the old management infrastructure of BBE creating three far more fit-for-purpose sub-committees with the following remits: Youth; Marketing and Funding; and Resources.

Also aware (despite his short time in office) of the need for a strong leadership succession plan for the organisation, nine trustees have been appointed and the interesting thing is that there are three trustees and a staff member on each of the three sub-committees, but each trustee only populates one sub-committee, so the three trustees of each sub-committee are always answerable to six other trustees at main Board level. Some of the names appearing on the sub-committees represent an influx of new and (encouraged by the new regime) old blood to the organisation. So former members like Paul Hindmarsh (on the Marketing and Funding Sub-committee) and Ray Sykes are working with new names such as chartered accountant, Michael Waterson - a prime-mover in the outrageously successful Hade Edge Academy (both on the Resources Committee) appear.

A number of co-opted professionals such as… wait for it - Paul Kelsall, a former Director of the Royal Mail and Sage Ireland, and more recently Technical Director of Marks and Spencer, are also helping. Paul has just completed the restructure of the online sales presence for the multi-national Company - Boots.

Cream PR has been appointed and the design Company, Genius Division, comprising a bunch of highly creative young marketing professionals based in Barnsley and funded by Barnsley Council, is spear-heading a major re-branding exercise for BBE, in the course of which the Company’s creative professionals have conducted focus groups with brass bands and the general public to determine what brass bands mean to them. Their findings revealed that brass bands equal a variety of things including tradition, so a logo has been conceived inspired by a floribunda rose called (believe it or not) the Brass Band Rose, which also resembles the view down a brass instrument bell. A new fit-for-purpose website that will form an important information resource for bands is also on the way. So it’s very much a case of a new broom with a wide arc sweeping clean, including consigning to the past commercial loss-makers like the English National Championships and the British Brass Band Registry, as reported in our news story on page 7.

The rest of this article is exclusively in Brass Band World Magazine.

To subscribe to Brass Band World Magazine, use the PayPal, select your location and click the 'Buy Now' button at the top of this page.