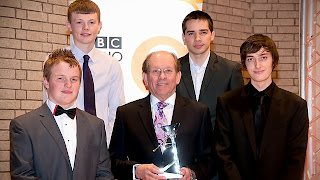 BBC Radio 2 has launched the search for its next brass star in this year’s Young Brass Award 2014. The nationwide search was announced on the Chris Evans Breakfast show as Chris was joined by Listen to the Band presenter, Frank Renton.

The station is looking for talented musicians aged between 16 and 21, who can rise to the challenge of performing and broadcasting with established performing groups.

After the initial entry stage, up to eight entrants will be selected to go through to the Semi-final, in which they will perform with the UK National Champions of 2012, the internationally acclaimed Foden’s Band. Four finalists will then be selected to play for the title in March 2014.  Presenter, Ken Bruce, will host the Final live from the BBC’s studios in Salford, where he will be joined by Frank Renton, who will also conduct the world-famous Grimethorpe Colliery Band. The band will accompany the finalists as they perform for the title in front of a panel of expert judges. Also on the night, Grimethorpe will treat the audience to a concert performance .

Radio 2 presenter, Ken Bruce, commented: “It’s an honour to be hosting BBC Radio 2’s Young Brass Award. It is so important to support and nurture young musical talent and I’m proud the station gives these emerging stars the chance to shine and be heard.”

Listen to the Band presenter, Frank Renton, also commented: “It’s wonderful that, yet again, Radio 2 is searching out the best young brass players in the UK and providing a stage for them. Every one of the winners thus far has gone on to do great things in their chosen careers, and no doubt taking part in the Radio 2 Young Brass Awards has given a great impetus to their futures. It’s a joy to be involved.”

All the details of the award and how to apply can be found on the BBC Radio 2 homepage at bbc.co.uk/radio2.