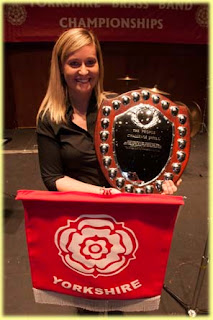 The Yorkshire Regional Championships have released the format of their 2014 contest.

Commenting on the appointment of adjudicators, Peggy Tomlinson, Yorkshire Regional Secretary, said: “We will be pleased to welcome all the adjudicators to St. George’s Hall next March. Most are familiar faces with the exception of Anne Crookston and Stephen Roberts, who will be in the ‘box’ for us for the first time. The adjudicators are looking forward to the challenge and I feel confident we may look forward to a good weekend’s contesting at Yorkshire 2014.”You can visit the Yorkshire website www.regional-contest.org.uk/yorkshire for full information and updates on the contest. Tickets go on sale via St. George’s Hall Box Office and on-line from Monday 13 January 2014.

The North West Regional Committee have announced that the adjudicators for the 2014 Championships on Sunday 9 March, at the Winter Gardens, Blackpool will be as follows:

Unfortunately, Simone Rebello had to withdraw from the panel and the NW Regional Committee is delighted that Gordon Higginbottom has agreed to adjudicate.  It has been a number of years since Gordon adjudicated at the North West Regional, due to conducting commitments. The sections will take place in either the Opera House, Empress Ballroom or Pavilion Theatre.


The 2014 Scottish Youth Brass Band Championships, which forms part of the Scottish Festival of Brass, has enjoyed significant growth in recent years. The 2013 youth Championships are now a two-day event, to accommodate the many entries across the six available sections, and will take place on 17 and 24 November at Perth Concert Hall.

As part of the development of this expansion, The Scottish Brass Band Association is delighted to open the doors to youth band challenges from other parts of the UK with this year’s introduction of the Open Senior and Open Premier sections.

Said a spokesman for the Scottish Brass Band Association: ‘The Scottish Youth Brass Band Championships are renowned for presenting world-class young musical talent and the new ‘open-door’ initiative in the Senior and Premier sections will now continue to develop the highly regarded reputation of the event’s performance mix, whilst widening the challenges of the competitions in these two particular sections.’