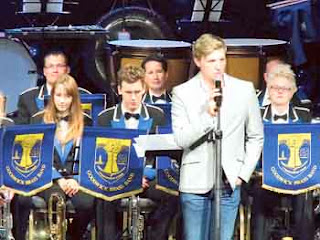 Musical Director, Matthew Jenkins, members of the band and committee were congratulated by County Chairman, Cllr Arwyn Williams, at the reception held at County Hall, Haverfordwest.

“This was a fantastic achievement,” said Cllr Williams. “Your youthful band has shown tremendous commitment and some of you travel considerable distances to be involved. Your families deserve our thanks too for their continuing support.”

Cllr Williams and his Deputy, Cllr Tom Richards, hosted the drinks and buffet reception and were also able to congratulate the band further on winning the West Wales Second Section title and Youth competition.

Goodwick’s Chairman, Tony Evans, responded by saying: “This is a great honour for our small community and we are most grateful to Pembrokeshire County Council for their recognition and for being very supportive.”


Fishguard and Goodwick, situated on Pembrokeshire’s beautiful coastline, has a combined population of only 5,000 yet attracts players for three bands, senior, community and junior. A number of its young players study music at the Royal Welsh College of Music and Drama in Cardiff and other universities.  Further information: Sian Jenkins on 01348  874228 or John Roche on 01348 840512.
Posted by Brass Band World at 13:35