Know The Score - Looking at the Area Test PIeces 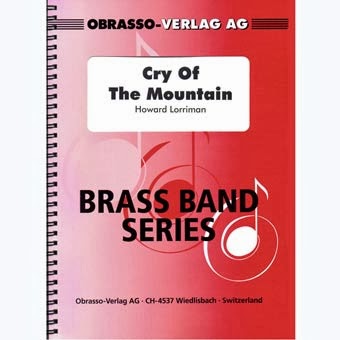 Section 1 - Cry of the Mountain
by Howard Lorriman

The composer, Howard Lorriman, writes: ‘The work is dedicated to Manfred Obrecht, conductor and musical editor. Manfred asked me to write a piece that captures the changing colours and mood of a mountain when viewed from a relatively close distance. I chose to cast the piece in four sections: Awakening; Snow, Ice and Glaciers; Vistas and Distant Peaks; and Avalanche.’
The first movement, Awakening, begins with the dreaded slow, quiet start, and is bound to set the contest nerves jangling. A 'piano' first entry from solo cornet on a top G is not going to help solo cornets rest easy for a few nights before the contest! A hymn tune-like section then builds into the second part, Snow, Ice and Glaciers, a much faster and more scalic patterned section. A regular acquaintance with the Bb major scale will certainly assist solo cornet and euphonium players here.
The third movement, Vistas and Distant Peaks starts with flugel and euphonium in octaves, before an extended euphonium solo, which will certainly test the soloists. Some of the best writing of the piece here creates beauty and atmosphere, and the sustained culmination will test stamina, balance and, above all, intonation.

Avalanche starts with a long unison note reminiscent of Philip Sparke's Harmony Music and this final section develops into a charge ahead of the advancing snow. With more than a nod to the Finale of Gilbert Vinter's Salute to Youth, it will take careful management of triplet rhythms and the tempo will need to be picked to suit the ability of the players. It will be very easy to gallop out of control here, if not careful.

Overall, the music lacks any real advanced technical difficulty. This does not mean that some bands at the lower end of each section will not struggle with it, but considering that the higher-placed bands in each ‘Area’ could be tackling works as difficult as St. Magnus within 12 months, it certainly emphasises the chasm between the pieces and sections this year.