The Neck of the Tuba!

The bi-annual International Tuba Euphonium Conference (ITEC) is returning to its launch pad of 41 years ago - Jacobs School of Music at Indiana University in Bloomington, Indiana, established in folklore as ‘the neck of the tuba’. Nicola Bland previews a mouthwatering line-up for the 2014 celebratory May ITEC and discovers just how far low brass has come in four decades. 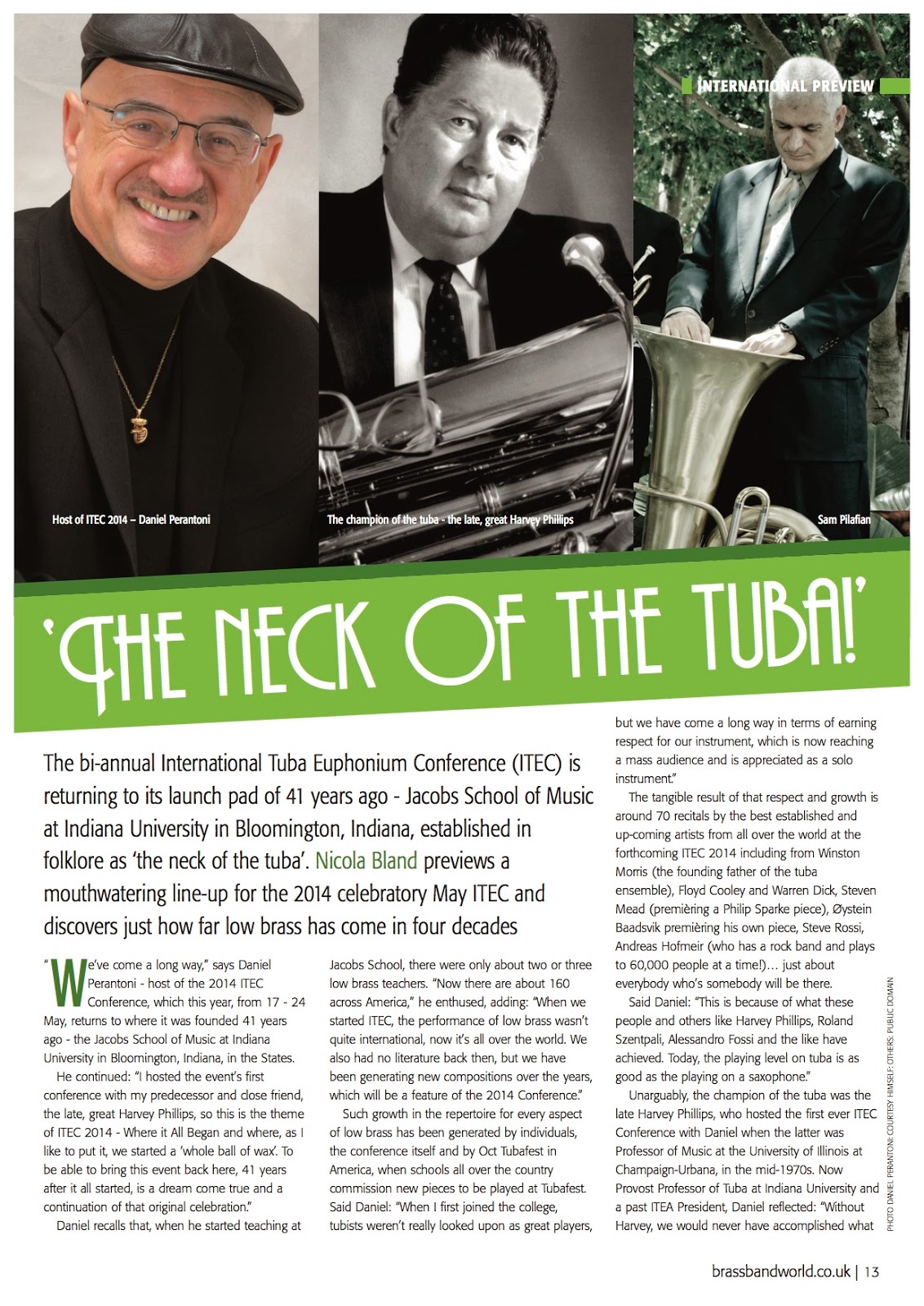 We’ve come a long way,” says Daniel Perantoni - host of the 2014 ITEC Conference, which this year, from 17 - 24 May, returns to where it was founded 41 years ago - the Jacobs School of Music at Indiana University in Bloomington, Indiana, in the States.

He continued: “I hosted the event’s first conference with my predecessor and close friend, the late, great Harvey Phillips, so this is the theme of ITEC 2014 - Where it All Began and where, as I like to put it, we started a ‘whole ball of wax’. To be able to bring this event back here, 41 years after it all started, is a dream come true and a continuation of that original celebration.”
Daniel recalls that, when he started teaching at Jacobs School, there were only about two or three low brass teachers. “Now there are about 160 across America,” he enthused, adding: “When we started ITEC, the performance of low brass wasn’t quite international, now it’s all over the world. We also had no literature back then, but we have been generating new compositions over the years, which will be a feature of the 2014 Conference.”

Such growth in the repertoire for every aspect of low brass has been generated by individuals, the conference itself and by Oct Tubafest in America, when schools all over the country commission new pieces to be played at Tubafest. Said Daniel: “When I first joined the college, tubists weren’t really looked upon as great players, but we have come a long way in terms of earning respect for our instrument, which is now reaching a mass audience and is appreciated as a solo instrument.”
The tangible result of that respect and growth is around 70 recitals by the best established and
up-coming artists from all over the world at the forthcoming ITEC 2014 including from Winston Morris (the founding father of the tuba ensemble), Floyd Cooley and Warren Dick, Steven Mead (premièring a Philip Sparke piece), Øystein Baadsvik premièring his own piece, Steve Rossi, Andreas Hofmeir (who has a rock band and plays to 60,000 people at a time!)… just about everybody who’s somebody will be there.

Said Daniel: “This is because of what these people and others like Harvey Phillips, Roland Szentpali, Alessandro Fossi and the like have achieved. Today, the playing level on tuba is as good as the playing on a saxophone.”

Unarguably, the champion of the tuba was the late Harvey Phillips, who hosted the first ever ITEC Conference with Daniel when the latter was Professor of Music at the University of Illinois at Champaign-Urbana, in the mid-1970s. Now Provost Professor of Tuba at Indiana University and a past ITEA President, Daniel reflected: “Without Harvey, we would never have accomplished what we have and now we have the next generation passing the treasure around at ITEC, so we’re very proud of our accomplishments.”

At 72 years of age, Daniel is still “passing that treasure around” himself, having last year completed a best of European master class tour with icons like Roland Szentpali and Alessandro Fossi. Now he’s in the thick of organising and hosting ITEC 2014, at which a vast array of tuba and euphonium soloists, ensembles and bands have been invited to return to the Jacobs School of Music’s Mac Hall - the first event ever held in the then new Mac Hall. Small wonder Bloomington is dubbed ‘the neck of the tuba’. Said Daniel: “this is low brass Mecca - where it all began. I’m very proud to belong to this university because the low brass fraternity here is treated very well, and the university is really behind us and what we’re doing at ITEC 2014.”